At the age of 13 he began his classical guitar studies with Maestro Roberto Fabbri. He was later admitted to the Santa Cecilia Conservatory in Rome where he graduated with full marks in 2013 under the guidance of masters Antonio de Rose and Guglielmo Papararo. He attends international masterclasses with  Stefano Palamidessi, Francisco Bernier, Dušan Bogdanović. Simultaneously to his study of contemporary he also add on the executive practice of ancient music.He attended for years the Baroque guitar masterclasses held in Rome (at the Civic School of Arts) and in Padua (at the Pollini Conservatory) by Maestro Rosario Cicero. He attended the summer courses of early music in Urbino in 2016, under the guidance of lutenist Paul O’Dette. He attends masterclasses with widely known musicians  like Joachim Held, Hopkinson Smith, Xavier DiazLaTorre just to name few. In 2018 he obtained the II level Academic Diploma in “lute and ancient plucked instruments” with Maestro Andrea Damiani at the Santa Cecilia Conservatory in Rome. He has been carrying out an intense concert activity for years. He performs as a soloist (classical guitar, baroque guitar, lute, theorbo) and in the following of various ensembles in prestigious festivals and musical institutions. He graduated in 2010 with honors in Historical Sciences at the European University of Rome. In 2015 he graduated in Musicology at the Pontifical Institute of Sacred Music in Rome. Since 2015 he has been a teacher of classical guitar at pre-academic courses in agreement with the Santa Cecilia Conservatory at the Nazareth Institute in Rome. Many of his students have been winners as a solo performer. He also directs, together with Maestro Felicia Toscano, the classical guitar ensemble of the school. 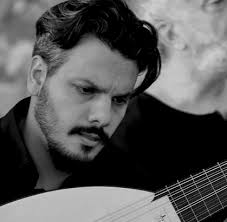