Former Principal Clarinet of the Scottish Chamber Orchestra (1996/2001) and of the Orchestra of the Teatro “Massimo” V. Bellini of Catania (1989/1995), Romolo Tisano then held the same role with the Royal Philharmonic Orchestra and the Royal Opera House “Covent Garden” in London, the Municipal Theater of Bologna, the Lyric Theater of Cagliari, the RAI National Symphony Orchestra, the Abruzzese Symphony Orchestra, the San Carlo Theater in Naples. He has collaborated with important chamber ensembles including the Instrumental Group Musica d’Oggi – Roma Sinfonietta, USA Spoleto Festival Ensemble, SCO Wind Ensemble, Edinburgh Quartet, Quintetto Belliniano, Roma Tre Orchestra Ensemble, I Fiati di Parma, Hebrides Ensemble and, during the stay in the UK, stands out his collaboration with the famous  British composer Peter Maxwell Davies. He has played under the direction of prestigious conductors, has participated in festivals of international relevance and has dealt with a large part of the solo and chamber repertoire performing in Europe, USA, America Latin, Far East and Arab countries. He has also made recordings for BBC-RADIO and RADIO-RAI. He is faculty at  Italian Conservatories of Music, from the academic year 2019/2020 and currently, he has been teaching clarinet at the “Santa Cecilia” Conservatory in Rome. 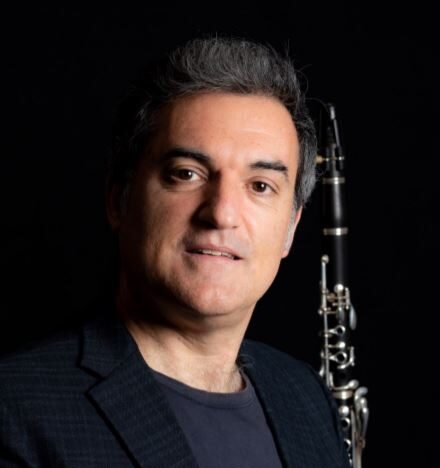