The ensemble is composed on average of 16 elements: all the singers must have undertaken the study of singing or vocal technique.The choir, often invited to various events dedicated to choral music, performed in important Italian venues including the Auditorium Conciliazione in Rome, the Aula Magna of the Sapienza University, the Basilica of Santa Maria in Ara Coeli in the Campidoglio and in the church of Santa Maria dei Miracoli in Piazza del Popolo in Rome.It participated in the production of several works in collaboration with important orchestra including the Symphony Orchestra of Rome, in the productions of Tosca and Bohéme starring the well-known soprano Daniela Dessì, receiving flattering acclaim from critics and the International Orchestra of Rome. The ensemble has appeared in television programs produced by Italian Rai Radio Television and TV 2000, as well as by numerous regional broadcasters in Umbria and Lazio. The RomEnsemble boasts a rare repertoire focused on Ancient Music and Sacred Music.The group is often a guest of the Federico Cesi Festival – Musica Urbis and of the Choir Winter Fest and protagonist of first modern performances or re-editions: in 2011 the Chorus closed the celebrations of the Menottian Year at the Caio Melisso Theater in Spoleto (PG) with the staging of “Chip and His Dog” by G. Menotti, opera for soloists, children’s choir and piano for the International Piano Festival of Spoleto and in 2013, as part of the event “Les Jour de France à Rome” performed the first performance of Francois Laurent’s opera “Italique”and collaborations with cantors of the Pontifical Sistine Music Chapel. In May 2019 the RomEnsemle Youth Choir and the White Voice Choir of the Civic School of Arts, prepared by M ° Annalisa Pellegrini, took part in the LIFE project which saw them protagonists of the “There Was a Child” concert at the Berlin Philarmonie together at the Berliner Philarmoniker conducted by M ° Simon Halsey. The formation also collaborates with the Via Luce Orchestra of Paris for which it performed the Mozartiade and Verba Mea concerts “From the Gregorian to the Roman 18th century: the great Italian Sacred Music”. 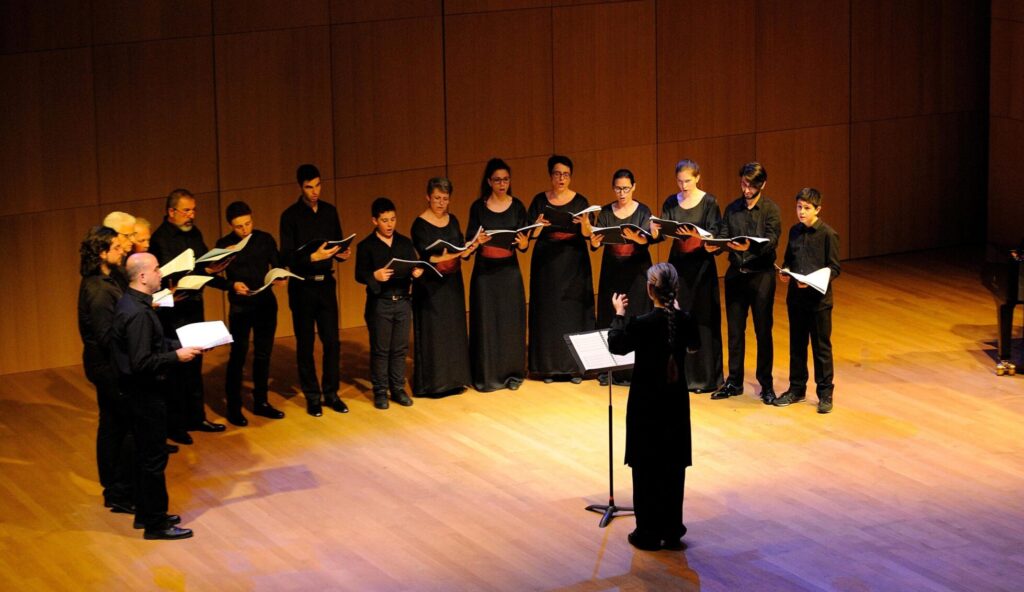