Born in 1969, at the age of six he began studying the violin with Maestro Ivan Kriwenski in Milan, immediately demonstrating outstanding artistic skills. He later continued at the Santa Cecilia Conservatory in Rome under the guidance of Felix Ayo, graduating in 1989 with honors and honorable mention. On that occasion he was awarded by ARAM as the best graduate and invited to hold a concert in the Auditorium of the State Discotheque. At the same time he attended higher courses at the Geneva Conservatory for four years with M ° Corrado Romano (former teacher of Uto Ughi), obtaining specialization and virtuosity diplomas. At the end of the courses he was chosen to give a concert at the Victoria Hall in Geneva performing as a soloist Max Bruch’s violin concerto with the Suisse Romande Orchestra. During his artistic career he was the winner of some important competitions such as Catanzaro, Pescara, Vittorio Veneto which led him at a very young age to undertake an intense concert activity as a soloist and in chamber ensembles collaborating with artists such as U. Ughi, A. Diaz, F. Petracchi, M. Campanella, P. Masi, M. Crudeli, U. Passarella, etc. His performances were broadcast by RAI. He has made numerous tours abroad, including in Florida with the Solisti Aquilani in 1989, in the United States with the “Giovani d ‘Europa” Chamber Orchestra for the Colombiadi in 1991 and with the same in Europe touching Switzerland, Belgium and Germany, in 1993. In 1994 he attended the Master Class with M ° V. Liberman at the Luxembourg Conservatory and from ’93 to ’96 the international courses of the Accademia Chigiana di Siena with M ° Uto Ughi, obtaining a scholarship for four consecutive years and the diploma of merit. He is invited to be part of juries in conservatory competitions and exams and to hold master classes annually in Rome, Morcone, Cortina, Atri and Molfetta. From 1997 to 2007 he was part of the National Orchestra of the Accademia di Santa Cecilia, as winner of the competition and is currently part of the Rome Philharmonic (formerly the Chamber Orchestra of Santa Cecilia) with which he has toured all over the world with directors such as Chung, Sawallich, Giulini, Pretre, Sinopoli, Pappano, etc. Since 2001 he has also collaborated with the Italian Cameristi. He is currently principal professor of violin at the G. da Venosa conservatory in Potenza. He plays an A. Poggi from 1937 and a G.Grancino from 1733. 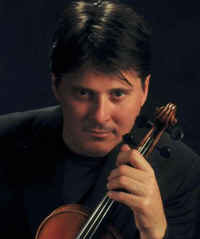