He studied cello and baroque cello at the Civic School of Music in Milan, graduating in 1990 at the “G.B. Martini ”in Bologna.He studied with Franco Rossi, Mario Brunello, Johannes Goritzki, Marie P. Milone, Roberto Gini. He has actively collaborated with various chamber ensembles and orchestras such as the Ensemble Concerto Italiano, the Byzantine Academy of Ravenna and other groups with whom he has played in prestigious Italian and foreign seasons (in France, Belgium, Germany, Russia, Spain, Portugal, Chile, Brazil, Argentina, Mexico, Morocco).He has recorded for the Opus 111 and Astrèe record companies and for the Amadeus magazine. Animated by a strong interest in music pedagogy in general and the teaching of the cello in particular, he studied in Hungary, first at the Franz Liszt Academy in Budapest in 1993 then at the Kodaly International Institute of Kecskemet in 1999 and 2001, focusing above all on issues related to the development of musical predisposition and talent of children and adolescents, ear training and voice training.For instrumental teaching he followed the training courses for the Colorstrings method with Geza and Csaba Szilvay in London(2003 and 2006 and in Helsinki (2005) and subsequently attended the qualifying courses of the Italian Suzuki Institute under the guidance of Antonio Mosca, obtaining second level qualification for this methodology. A highly experienced teacher, he has mainly concentrated his activity since 2000 at the “Sylvestro Ganassi” School in Rome where he has worked a great deal especially with children and teenagers and in addition to the cello class (which currently consists of about 20 students aged 6 years to 25) directs and coordinates the Orchestra and chamber music for strings in collaboration with Chiara Pontecorvo. 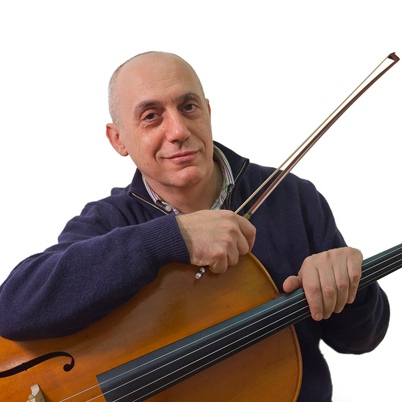