Rosario Gioeni, percussionist and marimbist, was born in Catania on November 22, 1985. He has showed strong interest in music from the age of 3. He began his studies at an early age and, at only 11 years old, he started playing with well-known jazz musicians. Among them, it is important to mention Franco Cerri, Gianni Basso and Romano Mussolini. In 1997 he was admitted into the class of percussion at the “Istituto Musicale Vincenzo Bellini” in Catania. In 1999 he joined the “Percussion Mundi” group, founded and directed by M° Giovanni Caruso.  The “Percussio Mundi” group used to perform at the “Massimo Vincenzo Bellini” Theatre in Catania (usually the “Ionisation” piece for 13 percussionists by Edgar Varese). In the year 2000, the same group recorded a CD entitled “Intorno a Bellini”. Between 2002 and 2003, Rosario Gioeni attended a course directed by Mike Quinn, who allowed him to further improve his skills with the Drum and the Percussion Orchestra. In July 2005, Rosario Gioeni achieved a Diploma with Honours in Percussion and the low Degree in Composition at the “Istituto Musicale Vincenzo Bellini”. Following his passion for percussion keyboard instruments, in 2005 he also attended a Masterclass at the Mozarteum in Salzburg, (directed by Maestro Peter Sadlo, one of the greatest soloists in the world), specializing in the Marimba. He continued to improve his studies even further, studying with Bogdan Bacanu, Filippo Lattanzi, Ludwig Albert, Nebojsa Jovan Zivkovic and Keiko Abe. He was the winner of several competitions as a soloist, including the famous 28th National Competition of Music “AMA Calabria” and the music competition “FIDAPA Sicilian Young Talents”, as well as the winner of the first prize at the 3rd European competition “City Campobello di Licata.” He also participated in chamber music ensembles and other competitions, such as the International Competition for Young Musicians “G.Campochiaro” and the International Competition TIM where he was the only Sicilian who arrived at the final competition in Rome. He also won the first prize and the special prize “Paolo Serrao” (100/100) in the IV European Music Competition “City of Filadelfia Paolo Serrao Special Award” sponsored by Adams. In 2009 he obtained a 2nd Level Postgraduate Academic Diploma (with honours) “ad Indirizzo Interpretativo – Compositivo”  at the “Istituto Musicale V. Bellini” in Catania. In 2010, in the same institute, he obtained a 2nd Level Postgraduate Academic Diploma “Abilitante per la Formazione dei Docenti nella Classe di concorso di strumento musicale A77”. In 2011 he obtained a Diploma with honours in classical guitar at the Conservatory “A.Corelli” in Messina. Rosario Gioeni has been teaching and giving concerts since the year 2004. At the “Teatro Sangiorgi” in Catania, he gave the premiere “Concerto for Marimba and Orchestra” in Italy composed by Emmanuel Sejournè. This concert was conducted by Maestro Akira Yanagisawa and accompanied by the Teatro Massimo Bellini Orchestra in Catania. In July 2012 he won the “special prize” at the “International Marimba Competition” at the “Mozarteum” in Salzburg, where about 80 candidates from all over the world took part. The prize was a Marimba Recital in the Salzburg Castle. Since the end of the year 2012 Rosario Gioeni has been playing, as Endorser, an ADAMS alpha series concert marimba. He is currently Professor of Percussion at the “Istituto Comprensivo Pestalozzi” in Catania 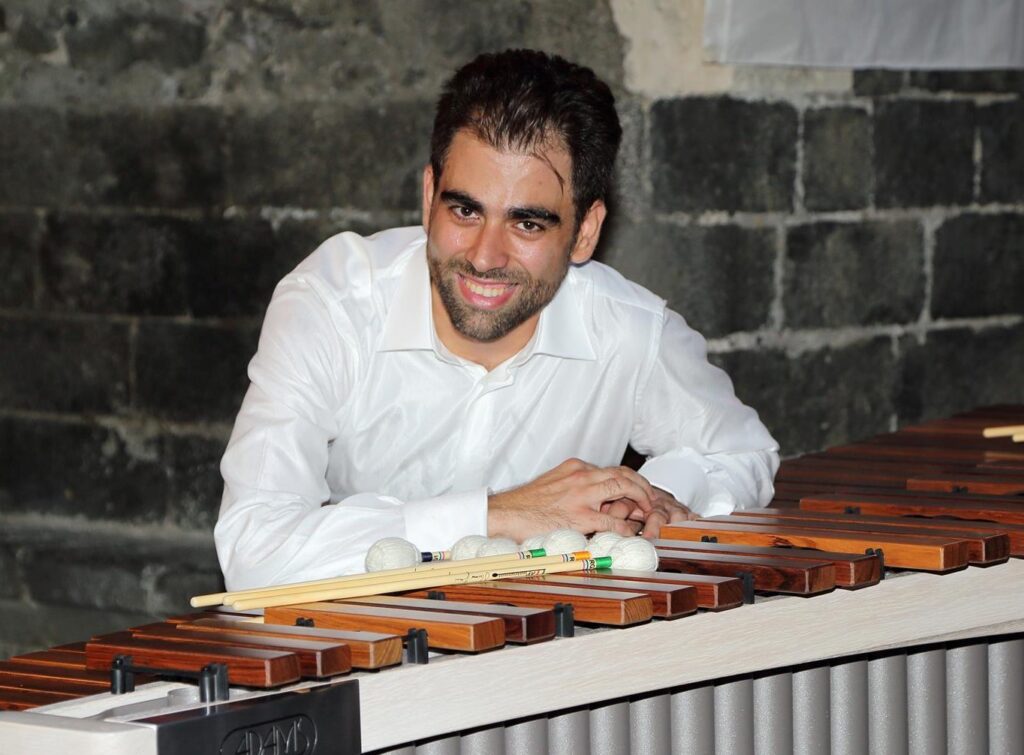