Heir to the chamber music tradition of Eugenio Bagnoli (renowned pianist disciple of A.Casella with multifaceted activities in duo with N.Milstein, H.Szeryng, Y.Menuhin, Z.Francescatti, J.Starker and many others) to which he owes his training, he graduated with highest honors from the Conservatory “B. Marcello” in Venice. Follows the courses of Franco Gulli, Marco Zuccarini and of the New York University-Department of Music, also studying conducting. Performs at the Gran Teatro La Fenice in Venice, at the Teatro Filarmonico in Verona, at the Teatro Verdi in Trieste, at the Teatro Bibiena in Mantua, at Palazzo Strozzi in Florence, and so on. The artistic work includes hundreds of concerts in Italy, Europe, Russia, Malaysia and Africa. He collaborates with musicians such as the violinist Felix Ayo and Georg Monch, the tenor Luigi Alva, the soprano Katia Ricciarelli, the mezzosoprano Sara Mingardo, the violinist Giuliano Fontanella, the first flute of RAI National Symphony Orchestra of Turin Dante Millozzi and others. He gets great success with concerts of Liszt, Mendelssohn, Mozart, Bach, etc. together symphony complex of fame such as the Orchestra of Radio and Television in Ljubljana. The repertoire is vast: it includes songs from the eighteenth century to the present day and complete cycles of various authors which all the Mozart sonatas for piano and violin, the work for piano duet by Mozart and Brahms, the Sonatas by Hummel with flute, etc. He is invited to play in honor to the tenor Luciano Pavarotti, the mezzosoprano Giulietta Simionato and others bigs artists; he performs live for domestic and foreign TV broadcasting. Makes recordings for the labels Decca, Newton Compton, Rivo Alto, Idyllium, Inedita CD e Metis Film. He Is often jury president or member in national and international piano and chamber music competition, regularly gives courses and masterclasses in Italy and abroad (Paderewski Academy of Poznan – Poland, Staatliche Hochschule fur Musik in Mannheim – Germany, Estonian Academy of Music and Theatre in Tallinn – Estonia, State Conservatoire in Kazan – Russia, etc). His students are often rewarded in various Italian and international competitions. By years is artistic director of several concert seasons and music performance competitions: actually he is member of the National Artistic Direction of A.Gi.Mus. and the President of A.Gi.Mus Fano Marche-Rotary Club Fano. He is Professor of Chamber Music at the Statal Conservatory of Music “S. Cecilia” in Rome and institutional member of the “European Chamber Music Teachers Association”. 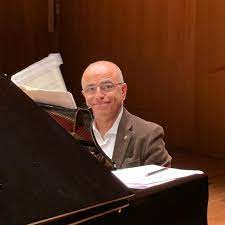