The CSA Youth Choir, of the Civica Scuola delle Arti in Rome, is a Choral Formation of Children’s Voices of about 40 elements from 8 to 16 years old .The Choir is a representative formation for the Municipality of Rome II which has recognized and certified its quality since 2010. The Youth Choir is made up of two sections: Pueri and Senior; it is a professional training of excellence whose members are selected annually not only among the students of the Civic School of the Arts, but also among the students of first and second grade schools of the territory. The formation, not only has been invited to partecipate in events dedicated to choral music, but has also performed in important Italian locations including the Conciliazione Auditorium in Rome, the Aula Magna of the Sapienza University, the Basilica of Santa Maria in Ara Coeli in the Campidoglio and in the church of Santa Maria del Popolo in Rome, the Theater of Villa Torlonia. It has collaborated in the production of various works together with important  orchestras, including the Rome Symphony Orchestra and the Rome International Orchestra in the productions of Tosca and Bohéme starring the well-known soprano Daniela Dessì, and the oratorio The Messiah by G.F.Haendel. The ensemble has appeared in television programs produced by Rai Radio Televisione Italiana and TV 2000, as well as by numerous regional broadcasters in Umbria and Lazio. The formation is often a guest of the Choir Winter Fest – International Festival of Choral Music and premiered  and performed modern re-editions: in 2009 it participated in the Tournée Ominibus Idem organized by the Arts Academy Foundation of Rome in collaboration with the Italian Cultural Institute of London and the Italian Cultural Institute of Vienna respectively in England and Austria with the execution of a rare repertoire of Medieval Songs and Laude; in 2011 the choir closed the Menottian Year celebrations at the Teatro Caio Melisso in Spoleto (PG) with the staging of “Chip and His Dog” by G. Menotti, a work for soloists, children’s choir and piano for the Spoleto International Piano Festival; since 2013, as part of the event “Les Jour de France à Rome” it premiered the opera “Italique” by Francois Laurent and the symphonic poem for soloists, choir and orchestra “The Prince and the Rose” by Angelo Bruzzese , a work freely adapted from the famous book The Little Prince by A. de Saint-Exupèry. In addition go being a stable guest at the Salle de Fète of the XIIIme Arrondissement of Paris on the occasion of the Semaine Culturale Italienne, in June 2017 the formation was invited by the Ravel Conservatoire for the execution of “Carmen a Fumetti”, a project for soloists, choir and orchestra winner of the Siae Sillumina National Competition. 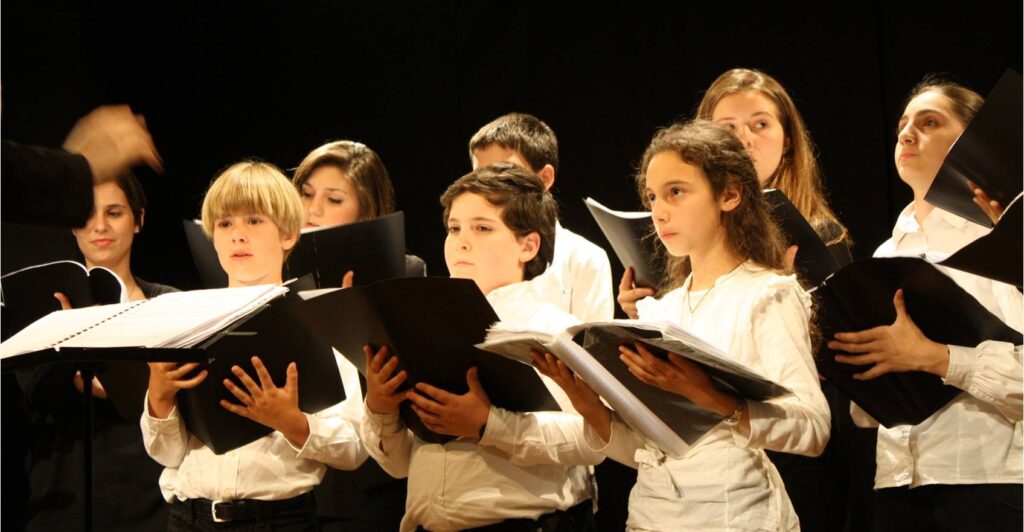