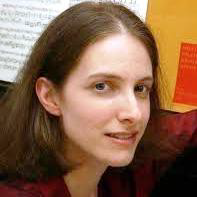 Elisabetta Ferri graduated from the Santa Cecilia Conservatory of Rome in Piano in 2001, studying with Grazia Barbanera and Raffaella D’Esposito, in Chamber Music in 2004 in the class of Rosaria Clemente, and in Harpsichord in 2005, with honors, under the guide by Fiorella Brancacci. In recent years she has particularly dedicated herself to the harpsichord, perfecting herself at the Music School of Milan with Emilia Fadini and at the Chigiana Academy of Siena with Christophe Rousset, where she also obtained a diploma of merit and a scholarship. She also attended numerous courses and masterclasses in Italy and abroad. She has won prizes in various harpsichord competitions: National Competition “Gianni Gambi” of Pesaro 2007, National Competition of Terzo (AL) 2009, European Competition “Paola Bernardi” of Bologna 2007 and 2011. She has held numerous concerts as a harpsichordist, both as a soloist and in ensembles, for associations, festivals and reviews in various Italian cities. In Rome at: Museum of Musical Instruments, Cassia Theater and Aurelio Theater, Archconfraternity of the Bergamaschi, Church of San Cosimato; to the Chapel of the Pietà dei Turchini in Naples; at the Sala dei Marmi of the “G. Rossini” Conservatory of Pesaro, for the Rotary Club; for the Festival “Places of the spirit and of time” in Ravenna; in Piedmont for the Antithesis Association, for the Review of Ancient Organs of Alessandria, for Ovada InContemporanea; In Milan: at the “Pietre Sonore” International Festival and at the Dal Verme Theater, for the Society of the Quartet. She dedicates herself to the music of the seventeenth and eighteenth centuries and in particular to J. S. Bach, D. Scarlatti, G. F. Handel, but as well as modern and contemporary music for harpsichord, which she has repeatedly performed in concert. As a pianist, she has played for SAT 2000 and RAI RADIO 3 and has performed in various chamber ensembles for associations and festivals: for the A.GiMus, in Rome at the Spanish Academy, the Auditorium of the Museum of Musical Instruments , at the Sala Baldini, at the Sala Petrassi of the Parco della Musica and in various other Italian cities. She is currently a graduate of the II level Academic Degree in Historical Piano at the Conservatory of Music in Perugia, in the class of Costantino Mastroprimiano. She is Professor of Harpsichord in the Pre-Academic Courses of the Civic School of the Arts.