Conductor and son of art, he was born in Rome. Coming from a family fully involved in the music and movie field he started acting an singing for the Choir of the Teatro dell’Opera di Roma during the summer seasons at the Baths of Caracalla immediately showing a strong passion for theater and in particular for music. He started his music journey performing guitar when he was 13 years old.At the age of 17 he already worked full-time as a session worker at the RCA in Rome, collaborating with the greatest arrangers and touring. He attended jazz courses at the Saint Louis in Rome with M. Ruocco and B. Tommaso. He began his classical guitar studies with Maestro B. Battisti D’Amario and graduated from the Conservatory of Santa Cecilia in Rome with Maestro Mario Gangi as chairman of the examination commission. He also attend masterclass with M. Barrueco, J. Tomas and L. Brower, etc. carrying out an intense concert activity both in Italy and abroad. In the following years, his passion for opera led him to undertake the study of composition and later of conducting. He fulfilled his studies  in the opera repertoire following various master classes and in 1991 he made his debut with a series of concerts conducting the great tenor Giuseppe Di Stefano in the most important theaters in Germany (Bonn, Stuttgart, Berlin, Frankfurt, Wiesbaden, Lubeck, Hanover, Munich, Nuremberg, Aachen, etc ..) with great success. Since then he has conducted more than  900 concerts between opera and symphonic repertoire in the most important international concert events all over the world.He has directed international artists such as G. Dimitrova, J. Carreras, N. Todisco, L. Bartolini, N. Martinucci, G. Taddei, B. Giaiotti, N. Sempere, L. Canonici, T. Fabbricini, G. Cecchele, M. Berti, Fr. Giuliacci, and others. As ballet director he has collaborated with Carla Fracci, Beppe Menegatti, Fredy Franzutti (La fille du Danube by A. Adam at the Rome Opera House), Raffaele Paganini (Romeo and Juliet by S.Prokofiev), Mario Bigonzetti, (Giselle by A. Adam), he also directed Pulcinella, Don Quixote, Sleeping Beauty, Swan Lake, The Nutcracker, Carmen Suite, Chopeniana, Bolero and more. 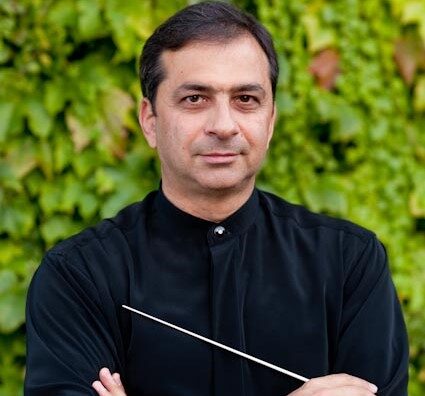